The 1,5-year Power Electronics and Microelectronics Master curriculum at Reutlingen University is centered around a one-year team laboratory project. In this project, starting from day zero of the curriculum, students gain hands-on experience with the joint development of a complex electronic system with microelectronic and power electronics components from specification capture over system architecture, ASIC, and PCB design to prototype implementation and test. Recent project assignments include the design of delta-sigma, or PWM modulated Class D audio amplifiers with gallium nitride power devices and developing a sensorless power controller for a switched reluctance motor. All assignments include the design of an analog or mixed-signal CMOS ASIC for signal processing and control purposes.

In this talk, I will present our learning-by-doing approach to teaching electronics design and discuss the organizational, technological, and financial requirements that must be met to make such complex projects feasible with students that have had little, if any, previous exposure to the theory and practice of ASIC design.

Eckhard Hennig received his Dipl.-Ing. degree in electrical engineering from the Technical University of Braunschweig, Germany, in 1994 and the Dr.-Ing. degree from the University of Kaiserlautern, Germany, in 2000. Since 2015, he is a professor of digital and integrated circuit design at Reutlingen University, Germany. His current research and teaching activities include mixed-signal system modeling and CMOS circuit design for power electronics applications. 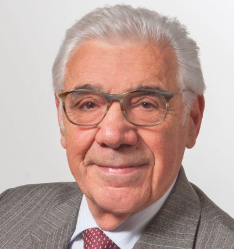 Use the Brain and not the Fingers

Many years ago, when I began my research career, there were very few tools to aid research, and one used one's ingenuity, imagination, and intuition; in short, the brain. After many years, powerful tools generate answers to research questions: The response is very fast, increasingly anticipating the answer and, for this reason, replacing the brain. In essence, research uses fingers to stimulate (and not guide) the tools. The situation is, in substance, a challenge between man and robot, and man can win by using his brain and not his fingers.

The presentation traces the evolution of research tools and indicates the advantages of a proper use and the risks of a dull utilization.

Franco Maloberti received the Laurea Degree in Physics (Summa cum Laude) from the University of Parma, Parma Italy, in 1968 and the Dr. Honoris Causa degree in Electronics from the Instituto Nacional de Astrofisica, Optica y Electronica (Inaoe), Puebla, Mexico in 1996. He was a Visiting Professor at ETH-PEL, Zurich in 1993 and at EPFL-LEG, Lausanne in 2004. He was Professor of Microelectronics and Head of the Micro Integrated Systems Group University of Pavia, Pavia, Italy and the TI/J.Kilby Analog Engineering Chair Professor at the Texas A&M University. He was also the Distinguished Microelectronic Chair Professor at University of Texas at Dallas. Currently he is Emeritus Professor at the University of Pavia, Italy and Honorary Professor, University of Macau, China SAR. His professional expertise is in the design, analysis and characterization of integrated circuits and analogue digital applications, mainly in the areas of switched capacitor circuits, data converters, interfaces for telecommunication and sensor systems, and CAD for analogue and mixed A-D design. He has written more than 600 published papers, ten books and holds 40 patents. He was in 1992 recipient of the XII Pedriali Prize for his technical and scientific contributions to national industrial production. He was co-recipient of the 1996 Institute of Electrical Engineers (U.K.) Fleming Premium. He has been responsible at both technical and management levels for many research programs including ten ESPRIT projects and has served the European Commission as ESPRIT Projects' Evaluator, Reviewer and as European Union expert in many European Initiatives. He served the Academy of Finland on the assessment of electronic research in Academic institutions and on the research programs‚Äô evaluations. He served the National Research Council of Portugal on a Board for the research activity assessment of Portuguese Universities. He was a Member of the Advisory Board of INESC-Lisbon, Portugal. He is the Chairman of The Academic Committee of the Microelectronics Key Lab. Macau, China.

He is member of the Editorial Board of Analog Integrated Circuits and Signal Processing, and Life Fellow of IEEE.